It’s the fourth day of my personally created culinary holiday in Morocco and whilst I’m slightly tired from awakening with the call to prayer in the medina at 4.30am, I am no less enthusiastic to participate in another cooking class.

Souk Cuisine is recommended by Lonely Planet, but what inspired me to sign up for this class was that I would be cooking alongside, and supporting local women who instruct at the cooking school.

Meeting outside Café de France at 10am, I’m introduced to Gemma van de Burgt who runs the school, and the other class participants who have come from the US, the Netherlands, England and finally myself being the token Aussie.

We started off the day by splitting into smaller teams and being given a shopping list of the ingredients to be purchased for the day’s lesson, along with a small pencil case of local currency to use when shopping around the souk. After initially freaking out about my appalling ability to communicate in Arabic and my non-existent bartering skills to use with the local market sellers, I quickly regained my sense of adventure and loved the “Amazing Race” style tour of the souks to locate spices, fresh fruit and vegetables. It was lovely just walking around at a leisurely pace and seeing a part of the medina where the locals shopped for their own food. If one seller was particularly busy with customers, we had the freedom to find and support another vendor who might be selling smaller quantities of the same product and who would also benefit from our purchase. 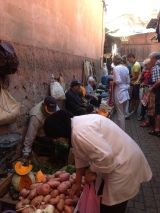 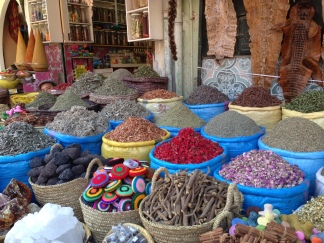 When all of the items on our team shopping lists had been purchased, we walked back through the medina to the riad where we would be cooking our lunch. Arriving at the beautiful riad, we had the opportunity to refresh ourselves with a drink, grab our recipes and aprons and then split again into teams to cook particular dishes on the menu. The courtyard of the riad had been set up in the style of an outdoor kitchen underneath giant banana leaves and white cloth, with transportable stoves and workstations, bathed in warm sunshine.

As I had previously made salads and meat tagines in my other classes, I was keen to try something new and make the fish tagine. One of the local women came over to assist at the workstation and teach us the recipe. However filled with enthusiasm and keen to start cooking, our little team had begun to slice the green peppers incorrectly, and her disappointment was evident! After being assured by Gemma that the dish would still be okay, we moved onto slicing carrots, potatoes and tomatoes before learning how to make the chermoula to marinate the fish and vegetables and assemble the tagine.

With the tagine slowly cooking on the stove, it was time to move onto making briouates. Thankfully I had learnt how to make this dish in Fes so I had the privilege of cutting up the warqa pastry, showing others how to make them and to repair the ones that didn’t quite resemble a triangle shape! With all the dishes finally prepared by the different teams, we were well and truly ready to head upstairs to the rooftop terrace and eat! 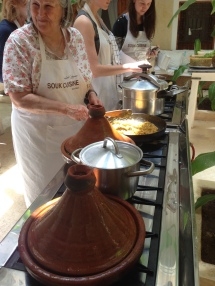 As much as I love cooking, I also get a lot of pleasure from eating and enjoying a long, leisurely lunch in the afternoon with no particular place to be. There was a colourful array of delicious salads to start with, whilst relaxing with a couple of bottles of Moroccan wine and chatting about our various holiday adventures and life at home while the tagines were brought out to the table. Unfortunately all good things eventually do come to an end, but I didn’t leave before indulging in a couple of ghriba biscuits with traditional mint tea before heading off for an afternoon siesta. 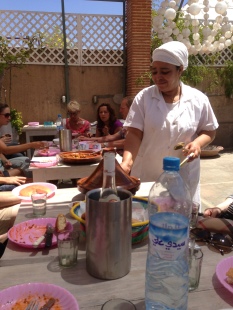 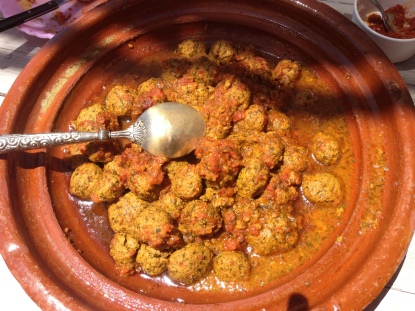 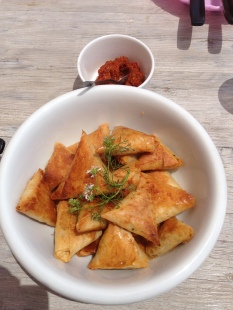