The last Saturday in September is considered in Victoria to be one of the most sacred days of the calendar year. Like many people, I had AFL Grand Final social obligations to attend in the afternoon however mine were located on the other side of Richmond, away from the MCG. I caught up with a friend during the week who lives in that location and happened to mention what my weekend plans were and that I was hoping to have breakfast in Richmond beforehand. Her immediate response was “Have you been to Touchwood?”.

I looked up Touchwood on the internet and decided that was where I was heading to for breakfast. Making my way there on the tram and navigating through large crowds of Hawks and Swans supporters, it suddenly occurred to me that having breakfast in Richmond on Grand Final day was probably not a wise decision and that I might be in for a long wait. When I got to Touchwood, there was a lengthy queue of people waiting outside, however luck was on my side and I was seated at a bench seat along the front window as soon as I walked in, with a fantastic view of the comings and goings of Bridge Road to divert my attention. 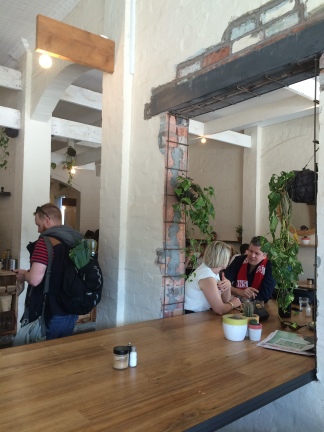 The café is right on trend with a neutral industrial interior – wooden bench tops with a black steel finish, a combination of exposed timber and metal beams, filament pendant lighting, and brick walls covered in stark white paint.

The seasonal menu is exciting with lots of different breakfast dishes to choose from – sticky coconut quinoa pudding; Dr Martys Crumpets with smashed banana, toasted hazelnuts and fresh honeycomb; Nasi Goreng; a Morning Grain Salad; two wicked versions of Avocado toast accompanied by a variety of fresh ingredients and the description of Touchwood Massive was absolutely mouth-watering but could easily sustain someone for at least 24 hours. I hardly ever see waffles on a menu and feeling that I was long overdue for something sweet, I ordered the “Banana and blueberry wholemeal waffles, organic maple syrup, vanilla crème fraiche and strawberry dust”.

My skinny latte when it arrived was probably one of the best coffees I’ve had for a long while. Made from a special blend of beans roasted by Five Senses, it was deliciously hot, sweet and creamy to taste. From the first sip, I mentally made plans to order my next cup as soon as I could and then my breakfast appeared before me.

With the sun streaming through the front windows, all the beautiful, harmonious colours on the plate seemed to be more vibrant and spectacular to the eye. The waffles were easy to tackle and delicious with the fresh fruit. Little pools of maple syrup kept the waffles soft and sweet however the dominant feature on the plate was the large quenelle of crème fraiche. A little dollop here and there went a long way. I must admit I was a little sceptical about the inclusion of wholemeal flour in the batter but couldn’t detect a hint of it on my palate. The few sprigs of lemon balm on the plate added a few little extra bursts of flavour and is undoubtedly my favourite herb of the moment. The waffles filled me up considerably and I couldn’t possibly finish off the crème fraiche and expect to indulge in the afternoon’s festivities.

The service is great and despite the rapid turnover and succession of clientele, you are made to feel welcome and no request is too much trouble. With amazing coffee and beautiful food, I hope I get the opportunity to go back there before next year’s AFL Grand Final.